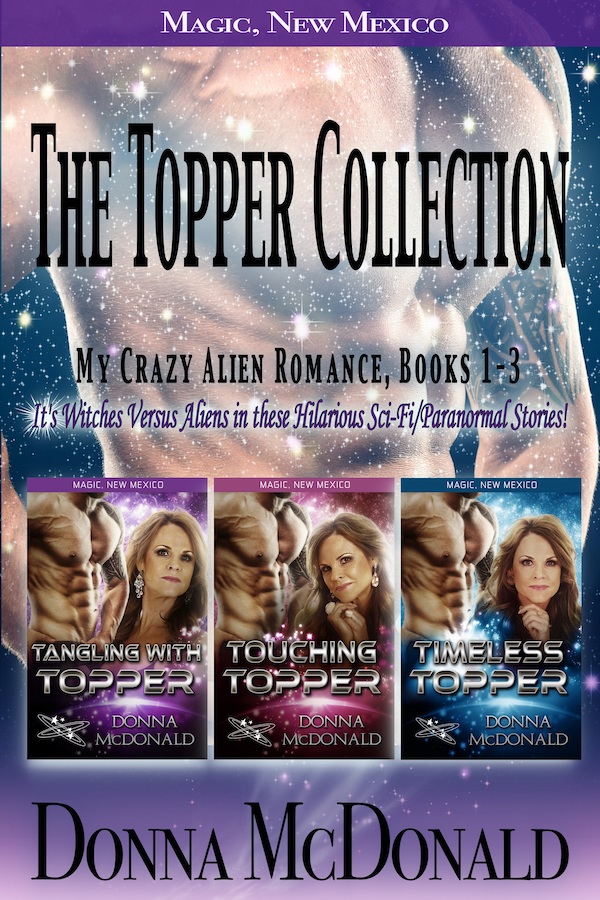 Welcome to Magic, New Mexico! It’s aliens versus witches in this Sci-Fi/Paranormal collection.

Quiet life for head witch Topper becomes a thing of the past when a naked alien steps out of the portal connecting the desert town of Magic, New Mexico on Earth with the ice planet of Glacier.

Topper didn’t always like being responsible, but as the head witch in the town of Magic, she has to do the right thing. That means no more chasing adventure fantasies for a while. It means no out of country safaris or whitewater river rafting until Magic's latest witchery fiasco is over.

Last time the witches of Magic opened the space travel portal, it was to reunite pregnant Earth witch Lacey with her Glacieran alien mate Frost. This time? It’s to let through some former alien superhero cop now turned animal catcher. Topper already caught most of the green meanies who'd snuck through on Frost's return trip to Earth. She feels confident she'll eventually catch the last three still missing. Why does everyone keep insisting she needs help?

Nothing on either planet explains why the allegedly mature Glacieran male steps from the portal completely naked. Stark is bossy and controlling as well as incredibly rude. Topper doesn't care how handsome he is or how impressive a man package he’s sporting. On top of not caring one whit that he’s embarrassed her and all the witches gathered to help her, Stark is the most arrogant being Topper has ever met. This includes her three mythological Goddess friends--the Fates--who decide to amuse themselves by taking some of her powers away without telling her why. Getting some new friends is going to be on her to-do list.

When the men in black suits and a nosy scientist arrive in the middle of their crisis, the additional troublemakers cap off the worst week Topper can ever remember having in her entire witchy life. The only bright spot is that Stark--for all his arrogance--turns out to be a sleek, sexy, and talented alien in bed. What he makes her feel is real magic and she intends to enjoy it while she can. He's the one male whose memories she won't need to wipe when it’s over because Stark’s leaving anyway.

Alaska is not as cold as Glacier, but it's the closest Topper can get to giving her new alien husband the perfect wedding gift. A sled dog ride through the falling snow was supposed to be both romantic and fun.

And it was until she started exploding snow.

Something very strange is happening to her magic and Topper doesn't know what. But It better not be the Fates again, or they'll be eating fast food for the rest of their unnaturally long lives because she won't be cooking for them.

When an enemy from Stark's past hunts them down, she has no choice except to risk using her magic to save them both. Goddess help her. She can't lose the only male she's ever loved.

Snow zones and ice patches are popping up all over. It’s Topper’s job to fix this conundrum even though she’s four months pregnant, yet looks like she’s about to give birth any second. The cold patches aren’t melting like ice should in New Mexico heat.

Add in fish shifter Alfred’s infatuation with a cat woman and there is double chaos… mainly due to the fact that cats tend to eat fish. When random aliens begin appearing too, it's all Topper can do not to turn the entire town into donkeys so she can give birth in peace. Something has to give.

What’s a pregnant witch to do? Solve Magic's problems, that’s what. But it’s easier said than done.

Topper feels ill-equipped to be a mother, even if the child rapidly growing inside her obviously doesn't agree. Growing at twice the rate of a normal baby, her daughter will arrive sooner than she can say Blessed Be.

But why in the heck hasn’t she known all this time that her alien husband, Stark, has a twin sister? Men never tell you the important stuff, no matter which planet they hail from. Whatever…

With her daughter on the way and the town in peril, Topper will sprint to the rescue once again… or waddle.

Goddess help everyone when she figures out what in her purple-haired glory days is going on.